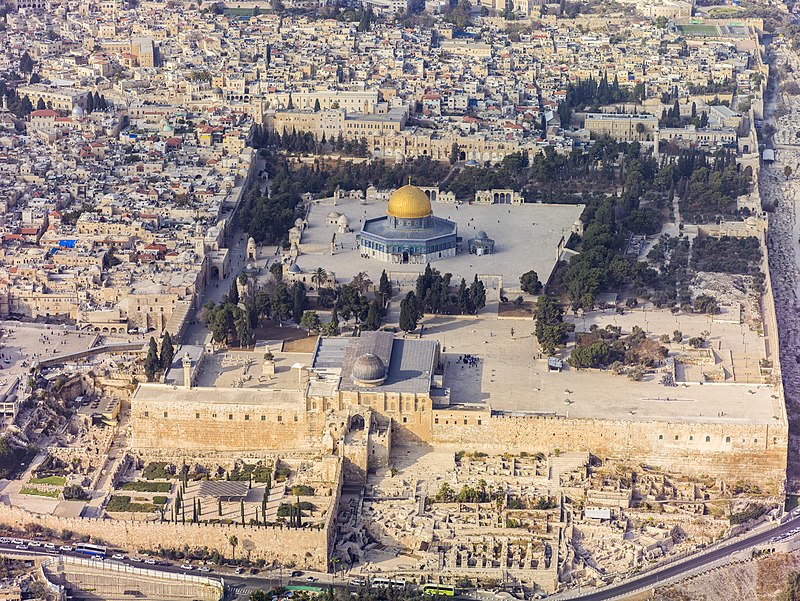 The city of Jerusalem is sacred to many religious traditions, including the Abrahamic religions of Judaism, Christianity and Islam which consider it a holy city. Some of the most sacred places for each of these religions are found in Jerusalem and the one shared between all three is the Temple Mount.[1]

Jerusalem has been the holiest city in Judaism and the ancestral and spiritual homeland of the Jewish people since the 10th century BCE.[2] During classical antiquity, Jerusalem was considered the center of the world, where God resided.[3]

The city of Jerusalem is given special status in Jewish religious law. In particular, Jews outside Jerusalem pray facing its direction, and the maaser sheni, revai and First Fruits must be eaten in Jerusalem. Any expansion of the city for these purposes must be approved by the Sanhedrin. [citation needed] Also, when the Temple in Jerusalem was standing, Jerusalem observed special laws regarding the Four Species on Sukkot, and the Shofar on Rosh Hashanah.

And God said: “Take now thy son, thine only son, whom thou lovest, Isaac, and go to the land of Moriah [Jerusalem]; and offer him there for a burnt-offering upon one of the mountains [Temple Mount] which I will tell thee of.”

Jerusalem has long been embedded into Jewish religious consciousness. Jews have studied and personalized the struggle by King David to capture Jerusalem and his desire to build the Jewish temple there, as described in the Book of Samuel and the Book of Psalms. Many of King David’s yearnings about Jerusalem have been adapted into popular prayers and songs.

Jerusalem appears in the Tanakh (Hebrew Bible) 669 times and Zion (which usually means Jerusalem, sometimes the Land of Israel) appears 154 times. The first section, the Torah, only mentions Moriah, the mountain range believed to be the location of the binding of Isaac and the Temple Mount in Jerusalem, and in later parts of the Tanakh the city is written explicitly. The Tanakh (or Old Testament), is a text sacred to both Judaism and Christianity. In Judaism it is considered the Written Law, the basis for the Oral Law (Mishnah, Talmud and Shulkhan Arukh) studied, practiced and treasured by Jews and Judaism for three millennia.[4] The Talmud elaborates in great depth the Jewish connection with the city.

According to the Hebrew Bible, the First Temple, at the site known as the Temple Mount today, was built by King Solomon and finished in 950 BC,[5] and Mount Moriah is where Abraham almost sacrificed his son and talked to God. When the Babylonians captured the city in 580 BC, they destroyed the temple and sent the Jews into exile.[6] That is, all worshiping was practiced in the temple and only the temple. From the Babylonian capture, Judaism was codified.[7] The Tanakh (Old Testament) laid the foundation for both Christianity and Islam.